After more than two weeks of blockade that piled untold hardship upon the numerous socio-economic problems facing the ordinary Haitian, as a result of the artificial fuel shortage, the criminal gangs that blocked access to the fuel depot in Varreux finally called for a ceasefire to allow trucks to come in to take the fuel to the petrol stations across the Port-au-Prince metropolitan area. Heavily armed criminal gangs had blocked the main road leading to the Petroleum terminal in Varreux, causing a temporary shortage in fuel supply that affected all walks of life, especially the hospitals where they were unable to provide necessary care for their patients. Once allowed in to get the fuel the fuel trucks delivered more than 1.5million gallons of gasoline and more than 2 million gallons of diesel. While the suppliers are working feverishly to meet the demand, the atmosphere at the pumps was more of chaos than orderly. There were long lines of motorists waiting to get gas while some of the gas stations are still closed. People with jerry cans are also lined up to buy the gas to be resold on the black market at exorbitant prices. To frustrated motorists, the system should have supplied all the gas stations at the same time to avoid the bottleneck and chaos that is present at the stations. Furthermore, there’s more diesel supplied than gas, which according to observes is a sly attempt by the gas station operators to supply industries rather than private cars, a process which is less chaotic than gasoline. According to the president of the organization of gas station owners, Marc-André Dériphonse, with no further interruption in service, all stations could be supplied before the end of the week. The organization further advised its members to avoid price gouging and limit supply to 1,500 gourdes per customer. As soon as the criminal gangs announced their ceasefire, 92 tankers left the fuel depot with 460,000 gallons of diesel and 210,000 gallons of gasoline.  Early Monday morning, the tanker MT Ridgebury Katherine Z delivered some 2.9m gallons of fuel, followed by MT Electra which delivered the same amount of gas the same day.

Meanwhile, the government of Ariel Henry is still struggling to find legitimacy after the September 11 accord fails to provide a date on which to formalize his cabinet, making it effectively in a limbo. Unable to find consensus, the interim Prime Minister, who also doubles also as the President, is moving at his own pace, coping with the pitfalls that come along. According to former Senator Edmonde Supplice Beauzile, the prime minister doesn’t want to set a date on which to swear in his cabinet ministers because of the pitfalls that are further amplified by groups that did not sign the September 11 accord. But she advised that the Prime Minister should continue talks with other forces to join in to help more the country forward.

In related news, at the 51st General Assembly of the Foreign Ministers and representatives of the Organization of American States, held n Washington, hosted by Guatemala, the delegates expressed their extreme concern for the increasingly worrying socio-economic and political crises, as well as the security and humanitarian crises that threaten the country with grave impacts on regional stability. They called on member states to address this situation as soon as possible. The group also stated that any solutions to the current multi-faceted crises facing the country requires cooperation from all the state actors of the Haitian nation, including the government, the opposition, civil society, business, and religious actors as well as the average citizen. The delegates further urged the OAS and the international community to continue their support to the Haitian authorities in their efforts to restore security, fight impunity defends human rights and where appropriate, prepared for a free, fair, and transparent elections. While also reaffirming their support for the Haitian people to build a better future, they encourage each other to cooperate with the Haitian nation in the investigation into the assassination of President Jovenel Moïse.

One of the suspects in the assassination of the former president has been arrested in Turkey. Samir Handal, who has a warrant out for his arrest by the court in Port-au-Prince, was arrested on Monday, November 15, 2021, in Turkey, as confirmed by a diplomatic source. Sources revealed that he was followed for two days before being arrested and currently being held by the Turkish authorities. Haitian authorities are currently working with the Turkish authorities to have him extradited to Haiti. The arrest was a result of mutual legal assistance requested by Foreign Minister Claude Joseph. By the end of July, the chief prosecutor of Port-au-Prince at the time, BedFord Claude, issued warrants against Paul Denis and Liné Balthazar, the pastors Gérald Bataille and Gérard Forge Janvier and Samir Handal for their alleged involvement in the assassination of President Moïse. Other suspects with warrants out there are still on the lam. This is notably the case with Joseph Félix Badio, John Joël Joseph and Wendelle Coq Thélot. In mid-October, Colombian assailant Mario Antonio Palacios was arrested in Jamaica. According to the police, he was part of the first team of mercenaries who broke into the residence of President Jovenel Moïse on the night of July 6.

Finally, the Haitian Minister of Women Affairs has condemned the inhumane way the Dominican Republic has treated pregnant Haitian immigrant women. After arresting them in the birthing rooms in Dominican hospitals, 45 women, including 28 pregnant for several months, were repatriated, on Thursday, November 10, 2021, to Belladère / Central Plateau (on the common border with Comendador / Elias Piña). At the same time, 83 Haitian migrants including 55 women and 28 men were expelled to the border at Belladère. In October, the Dominican authorities deported more than 6,031 undocumented to the Northeast border area, according to the Jesuit migrant services Service Jésuite aux migrants (SJM). The ill treatment netted out to Haitian women who simply come to the hospitals to deliver are considered inhumane cruel and abusive. 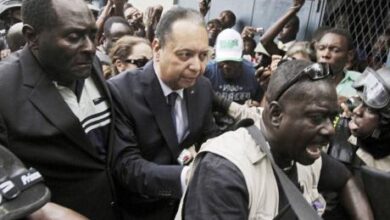