Prime Minister Ariel Henry has taken steps to form a new electoral commission, CEP, in accordance with the September 11, 2021 agreement his office signed with political parties and civil society organizations to form a peaceful and effective transitional government. The Prime Minister has since written to the various groups with a stake in the political life of the country, to propose names of candidates from their various sectors in order to form the new CEP. Human rights organizations proposed three (3) candidates, including a female and the deadline proposed by the Prime Minister’s office is October 13, 2021. The Prime Minister hopes that a new CEP with commissioners who are upright citizens will inspire people to come out to vote. Towards this end, his letter dictated the qualifications of proposed commission for members who are expected to meet the following criteria: be of Haitian citizenship, residing in the country, with a good reputation and without any involvement in the criminal justice system, have a college degree and at least a dozen years of professional experience, have a legal or public administration background, and knowledge of electoral policies. The Prime Minister also called on the organizations to be clear in their nomination by nominating people who will not create controversy or cause dispute among the population. It important to note that on Monday, September 27, 2021, the Prime Minister dissolved the CEP put in place by former President Jovenel Moïse in September 2020. Their dismissal has been contentious since they argued that only a presidential decree can remove them from the committee.

Meanwhile, the most recent version of the draft constitution removed article 41.1 from the current 1987 Constitution, which stated that Haitians do not require visas to travel out and into the country. While some may not see this as an important issue, it was clearly an important issue in the 1987 Constitution, if only because it seeks to ensure that this would not be at the mercy of the whims of any future leaders because the November 25, 1959 on immigration and emigration under Francois Duvalier required exit visas for both nationals and foreigners. Article 66 of the new draft constitution stipulates that any Haitian with a valid passport who wants to travel outside of the country must obtain a 25gourdes exit visa from the Ministry of the Interior. The modalities suggested including the fact that the traveler must make the departure declaration at least 48 hours before the travel date, with the original declaration kept at the Immigration Bureau and a copy sent to the police. In addition to the passport, the traveler must produce their birth certificate, ID card, two passport pictures, marriage certificate where applicable, spousal authorization, or parental authorization when the traveler is a minor, and certificate of naturalization where the individual is a naturalized citizen.

Elsewhere, the insecurity in the country is going on full steam with criminal gangs ever flexing their muscle across the capital in particular and the country at large. The increasing boldness of gangs is paralyzing all activities in the country. On Monday, the gangs struck again in Martissant where they systematically searched all vehicles coming in and going out of the neighborhood, as well as passers-by. This action is a direct execution of the threat made by the leader of the Village de Dieu gang, known as Izo, who the previous night warned that he was going to put the neighborhood on lockdown, in response to  shots fired by the police the previous night. His threat did not consider the needs of the people who use this important axis of the capital city that provides access to four (4) southern departments. As of now, there is no conclusive information about what actually transpired but information reaching the wires suggested that there were some people kidnapped during the standoff. Also, the eastern part of the capital, in the resort area of Montagne-Noire, was shaken when people took to the streets to protest a kidnapping in the area. Even people driving though the area to reach Kenscoff were not spared the anger of the residents, who threw stones at them, with traffic at a standstill. Delmas 28 also saw a protest in the streets from parishioners from the Free Methodist church, who took to the streets to demand the release of their pastor, Dévariste Eliodor, who was kidnapped on Saturday. Other kidnapped religious figured include Pastor Jean Mary Ferer Michel, who was abducted last Sunday at the Jesus Center Church in Delmas 29 and is still in captivity. Pastor Lemaitre Zéphyr argues that the protestant churches are being targeted because of their size, calling on the authorities to act to protect the people. And in the afternoon, there was a violent clash between the police and the 400 Mawozo gang in Pernier, which resulted in the death of 4 gang members, who were trying to hold up a business. The police seized an automatic rifle and a pistol. Again, on Monday, a raid in Bonga area of Rezencourt, in the Kenscoff commune left 4 more deaths including Augustin Sanon, who was killed in his home. This incident however was a result of a year old feud between two families, when one member went to seek revenge by soliciting armed gangs to help him exact the revenge. Besides the dead, there were two wounded and a dozen houses were burned down, with the police and justice unable to do anything.

Finally, former first lady, Martine Moïse formally made a deposition against the current Prime Minister and those accused in the assassination of her husband and former President Jovenel Moïse, according to her lawyer, Emmanuel Jeanty. In a statement to the press, Emmanuel Jeanty said that Martine Moïse and her two children, Jomarlie Moïse and Jovenel Moïse Junior have formally filed a complaint against Ariel Henry, Paul Denis, James Solages, Joseph Félix Badio, Dimitry Hérard, Wendell Coq Thélot, Jean Laguel Civil and all the other individuals named in the judicial police (DCPJ) report. DCPJ. The plaintiffs filed a complaint against Ariel Henry because reports reveal that he had telephone conversations with Joseph Félix Badio on the evening of the assassination, thought was not entered into the plea. The plaintiffs and their lawyers hope that with this action, the investigation into the assassination of their father and husband can be concluded and justice rendered, though they have no illusions of the nature of the judicial system in the country. The first lady went to the chambers of Judge Garry Orélien to be interviewed and see how the investigation can go forward. She said to have answered close to 80 questions in about 3 to 4 hours. They hope to use all tools in their disposition to shed light on what actually happened to the president and bring the perpetrators to justice. 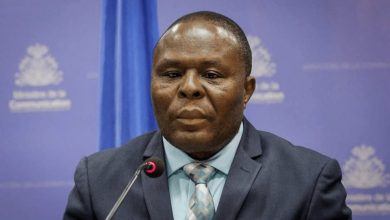