The rapid speed of events and information on Haiti is so astonishing that every story becomes obsolete within minutes and replaced by another as a vicious cycle of competing stories emerge about every minute, each one being replaced by new and more outlandish ones. On Monday July 19, 2021, the interim Prime Minister, Claude Joseph, who had been replaced when the assassination of President Jovenel Moïse took place, decided to hand over power to his successor, who was named just days before the assassination. Doctor Ariel Henry was scheduled to be sworn in as Prime Minister the day after the President was assassinated creating a power vacuum and increasing animosity between the two competing politicians. After days of discussions, Claude Joseph apparently decided, in an interview with the Washington Post, to hand over the reins of power to Ariel Henry. The new government is expected to be formed with Ariel Henry as the newly named interim Prime Minister, and the outgoing interim Prime Minister Claude Joseph keeping his portfolio as the Minister of Foreign Affairs. The official statement announcing this new change in government stated that there will not be a President and the new government will be tasked to organize general elections as soon as possible. This decision came less than 48 hours after the Core Group (comprised of the Ambassadors of Brazil, Canada, Germany, Spain, United States, European Union and the UN Secretary General’s envoy) called on Ariel Henry to form an inclusive and consensual government to address the issues he was called to tackle before the fateful demise of President Jovenel Moïse . In a statement made public, the Core Group concluded that as the country faces serious dangers, their wish as a group is for all political, economic and civil society actors in the country to fully support the authorities in their efforts to restore security throughout the country, including areas currently plagued by gang violence, to organize free, fait transparent and credible parliamentary and presidential elections as quickly as possible to ensure that basic government and public services are provided to all.

No sooner had the 71-year-old Henry, who is the 7th choice for Prime Minister under Jovenel Moïse than the former began to name his cabinet. The list of 18 Ministers has been officially published in the gazette, Le Moniteur on Monday, July 19, 2021, with Henry himself retaining the portfolio of Minister of Social Welfare, three (3) other Ministers have also retained their portfolios and the former Senate President Simon Dieuseul Desras was tapped to head the Ministry of Planning and External Cooperation. Despite the nominations, opposition groups have generally shunned the new formation as they do not think it reflects any consensus. The new Prime Minister has held other posts such as Minister of Interior, then Social Welfare under the Premiership of Evans Paul, under President Michel Martelly. A respected neurosurgeon, Ariel Henry was a member of the INITE party founded by the late President René Préval, a party that has since fragmented to various factions in the opposition today.

Meanwhile, the wife and widow of the assassinated President Jovenel Moïse, Martine returned to Port-au-Prince on Saturday, July 17, 2021 from a Miami hospital after suffering gunshot wounds during the assassination of her husband. After ten days at the hospital where she underwent surgery, she returned home, with her hand in a sling. She landed at the Toussaint Louveture international Airport aboard a private jet and was welcomed by the Prime Minister, Claude Joseph. She could be seen on the tarmac, dressed in all black, with her hair cut in an afro and wearing a bulletproof vest, flanked by security forces. She is expected to take part in her husband’s funeral planned for Friday, July 23, 2021. According to the Secretary of State for Communication, Frantz Exantus, the First Lady is also expected to participate in the preparations for her husband’s funeral.

In press conference at the Prime Minister’s official residence in Musseau, the Minister of Culture and Communication, Pradel Henriquez announced that President Jovenel Moïse ’ state funeral will take place on Friday, July 23, 2021 in Cap- Haïtien. Both Thursday and Friday have been declared national holidays but in a communique from the First Lady’s office, the statement purported that the assassinated president’s family would like to foot the bill for the state funeral deemed fitting for a person of his stature. While the family will go along with all the pomp and circumstances that follows a state funeral, they do not wish for state funds to be used for the funeral. Meanwhile of Friday, thousands of people all dressed in white tee shirts took to the streets in Port-de-Paix and Trou-du-Nord to demand justice for the assassinated president. There were placards expressing their anger and frustration at what transpired, with such expressions as “San Jovenel pap koule pou granmesi”, “ Aba USA”, “Mare Léon Charles”, and “Mare tout sekirite ki te nan kay prezidan an” . While on the same Friday, former President Jean Bertrand Aristide returned home from Cuba to a hero’s welcome, after spending time in the neighboring where he underwent treatment for Covid-19. A trip that was accorded him paradoxically, by Jovenel Moïse. 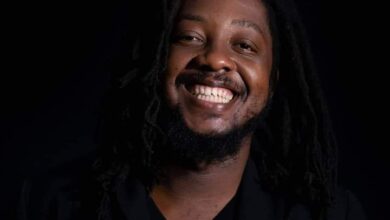 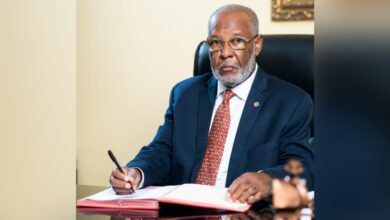 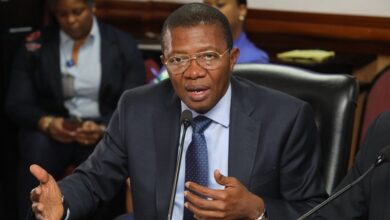