Sunday, September 11, 2022, marked the first anniversary of the signing of the accord that seeks to put the country back on track after recent years of turmoil and crisis. To mark the occasion, interim Prime Minister Ariel Henry took to the airwaves to address the nation on what had come to be known as the September 11 accord. In his speech, broadcast on TV late in the evening, the PM spoke on the delays in the implementation of issues identified in the agreement and the need to adopt a more consensual way out of the crises. Mr. Ariel spoke on how some of the signatories to the agreement criticized him for taking too long to implement all the provisions. Acknowledging their concerns and frustration, Mr. Ariel stated that the delay is intentional because of the current general malaise in world affairs and economy, it is not advisable to allow one group to prevails over all the others. The important thing is to bring together as many groups of compatriots as possible in order to find lasting solutions together and to ensure that, coming out of this crisis, the country can start afresh and commit itself to the restoration of democracy and the rule of law, as well as to the revitalization and transformation of the economy.

The Prime Minister expressed his gratitude to various individuals and groups that have worked to initiate dialogue over the years, and though none has borne fruit yet, he announced the organization of another roundtable, preliminary work has included groups from academia, business, and religious sectors, as well as the September 11 accord signatories. After thanking these people for their dedication, Mr. Ariel went on to thank partners in the international community for their support in these difficult times and renewed his appeal for help to his government to improve the performance and functioning of the national police, by providing them with adequate resources and material to effectively do their job of restoring security to the country. According to the Prime Minister, if the PNH receives the necessary training, the appropriate supervision, and the essential means; it will be able, within a reasonable time, to ensure the security of the country and the free movement of people and goods throughout the nation. Other concerns brought up include fighting corruption and fraud, prosecuting offenders of all stripes; fighting against discrimination of all kinds, considering the possibility of encouraging investments to provide the nation with financial support to combat unemployment and improve the living conditions of the people. Before the end of the year, the Prime Minister promised that there will be free and fair elections to allow those willing to direct the affairs of the state to have their day in the sun.

Prior to PM Henry’s speech on Sunday, former President Jocelerme Privert, sent out a tweet on Saturday, September 10, 2022, in which he called for real political dialogue to prevent the country from sinking further into anarchy.  Mr. Privert added that the uncertainty of the times calls for all to draw on their patriotism and sense of compromise to begin a real dialogue, because the polarization of the political situation which is aggravated by the various calls for general uprising and the incendiary rhetoric by some leaders risk plunging the country further into political adventurism for which the consequences may be unfathomable. Mr. Privert concluded that there’s a need for a wait and see attitude with regards to the way forward.

Claude Joseph was the Prime Minister at the time of Moise’s death and returned to the post of foreign minister when Ariel Henry took power. He resigned later and became critical of the current regime on social media and has demanded answers from the ongoing investigation into Moise’s death. Mr. Joseph recently founded a new political party, with the aim of running for president when elections are held at a still-unspecified date. He spoke about the increasingly tense relationship between Haiti and the Dominican Republic during a political gathering on Saturday, stating that Haiti will never be transformed into the backyard of the Dominican Republic, and that he opposed the hegemonic and dominating will of the Dominican racists. While not bothered by the ban, he went on to say that he’s not fighting Dominicans because the two nations are condemned to live as brothers. But his criticism is to the condescending racists and ultranationalists in that country who do not respect Haitians. 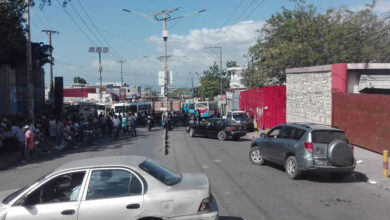