Tropical storm Laura has dumped considerable amount of rain on the island this weekend, bringing with it flooding and destruction, killing at least twenty people, according to preliminary reports from the Ministry of Interior. The 13th tropical storm of this hurricane season, the strong winds and heavy rain caused rivers and canals to crest, resulting in harm to those along its way, with reports of people missing and houses and farms destroyed. In the West, notably the Port-au-Prince metropolitan area, five people were reported dead and two declared missing; a physician and his 10 month old baby; a body found floating in the flood waters in Bicentenaire neighborhood; a mother of four died at Cité Militaire and another two women in Pèlerin and a man in Girado. In the Southeast Department, a ten-year-old girl was killed when a tree fell on their home in Cachiman located in downtown Anse-à–Pitres. Other deaths recorded are that of a woman in her fifties in Marbial, a 70-year-old who was swept away by the floodwater and a man in Marigot, and another near Perado. Beyond the human toll is the property damage which is just as devastating, with houses, cars and other property destroyed across the country, including the Tèt dlo market in Petionville which was destroyed by flash floods. During a trip to the emergency command center on Sunday, President Jovenel Moïse expressed his sympathy to victims and their families and promised to provide help to those affected, and also announced that cleaning work will soon begin on the Artibonite river. With the storm headed to Cuba, some experts are predicting that if the trend continues, Haiti will likely see more severe storms this season and warnings about taking emergency preparedness measures to avoid devastating casualties in future storms.

Meanwhile, President Jovenel Moïse launched a new financial service in the form of a bank, in his efforts to promote agriculture as a vital part of the economic development of the country. Swearing in the Board of Directors on Monday, the president officially created the agricultural development bank, la Banque Nationale de Développement Agricole (BNDA), which is expected to serve as a tool to encourage financing in the sector and transform the agricultural sector and by extension, the lives and economy of the rural areas. According to the president, the bank will aim to reduce the food shortage in the country and, while encouraging the move from subsistence farming to farming as an economic development tool, capable of generating wealth. He deplored the fact that credit in the agricultural sector is insignificant while it represents 20 percent of the GDP, employing some 60 percent of active adult workers, therefore the need to inject the necessary capital into the sector. The bank must seek innovative solutions to the problem of agriculture in the country, regretting that thousands of millions of dollars have been spent to import goods, pointing out that the government continues to invest in Agric infrastructure, setting up credit cooperatives and seed centers as well as subsidizing seed purchases. The bank is charged to find answers to problems faced by farmers such as lack of conditioning and storage centers in the regions.

Elsewhere, around 300 groups including opposition parties, political and cultural organizations have agreed on a resolution calling for President Moïse to resign. In their new offensive, the leaders calling for the President’s dismissal claim that it is impossible to organize transparent and honest elections under this President, and plan to come up with a transition plan once the president steps aside on February 7, 2021, when the current presidential is expected to end. The transitional government will then be charged with the responsibility to organize elections. The writer, Lionel Trouillot is happy about the mobilization from all segments of the society and assures that other organizations will soon join in signing on to the document. Political parties from both the radical and moderate oppositions have supported the new movement and such parties as OPL, Vérité, Fusion, AAA, and Pitit Dessalines have all planned to boycott the upcoming elections.

While talking about opposition, public sector teacher’s union is calling for an indefinite general strike and work stoppage starting on Monday, August 24, 2020, until they obtain a satisfactory response to their demands, namely, creating better working conditions for teachers. Some of the unions that are participating include the l’Union nationale des normaliennes et normaliens haïtiens (UNNOH), l’Union nationale des normaliennes/normaliens et éducatrices/éducateurs d’Haïti (UNNOEH) and la Confédé-ration nationale des éducatrices et éducateurs d’Haïti (CNEH). The unions called for an immediate re-versal of all measures deemed antidemocratic and retrograde, taken by the current Minister of Education Pierre Josué Agénor Cadet, against some union leaders. They also called for the reinstatement of the memorandum of understanding, MOU, that authorizes students from the teachers college, l’École normale supérieure (ENS) of the l’Université d’État d’Haïti (UEH) to take advantage of internships and nomination letters, and also the dismissal of the Education Minister himself.

Finally, the Haitian businessman, Dimitri Vorbe, one of the vice-presidents of the energy company, Sogener, was arrested on Friday, August 21, 2020 in Miami by US Immigration Services and currently being held at the Krome North SPC detention center, according to the Immigration and Customs Enforcement, ICE. No specific information has been given as to the reason for his detention. But on July 20, 2020, justice officials seized the offices of the energy company, Sogener, as well as the private residences of Reginald and Jean Vorbe and Élisabeth Préval. According to government lawyers, Osner Fevry, the move is to be able to get the justice departments’ hands on properties belonging to Sogener and the two persons cited by government prosecutor, Mathieu Chanlatte. The prosecutors hope that the arrest warrant put out for these people would finally be executed. Lawyer for Mr. Vorbe, Guerby Blaise spoke of a warrant out there, signed by the prosecutor of Port-au-Prince, Ducarmel Gabriel, asking American authorities to extradite his client. But such request has been denied on social media because a prosecutor cannot make an extradition request of another country.
Dela Harlley 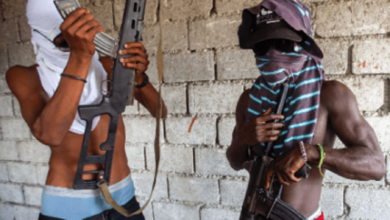